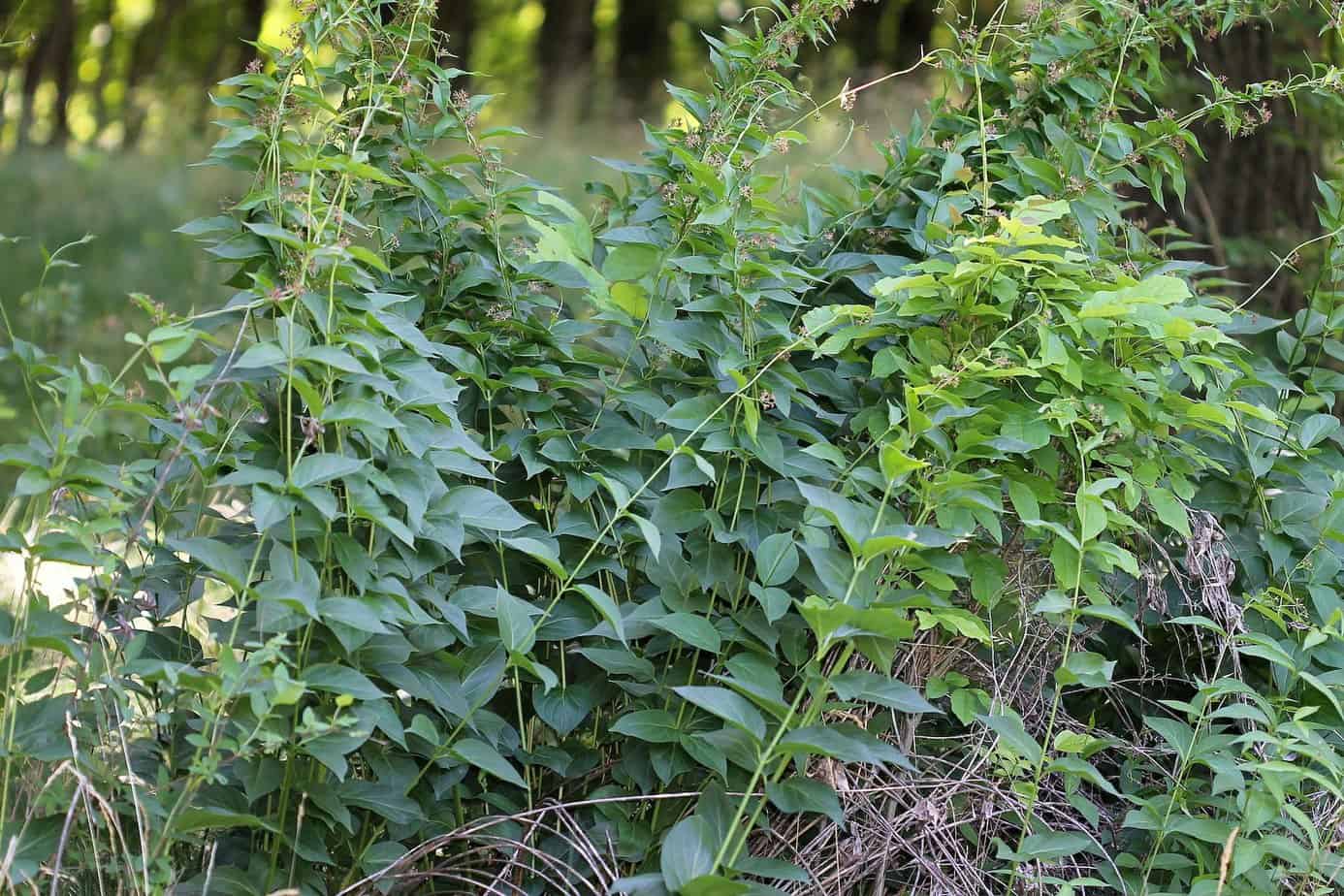 There are many species of invasive plants and weeds, but none more so than the somewhat scarily-named ‘dog strangling vine’ (scientifically called “vincetoxicum rossicum“. Dog strangling vine (DSV) is an invasive perennial herbaceous plant. It spreads rapidly and is now causing major destruction to ecosystems in the United States and Canada.

Invasions of DSV harm both the economy and biodiversity. Recreational activities are hindered by the thick vegetative mats that it forms, it creates a negative impact on managed woodlots, and it easily chokes out native species. For homesteaders, DSV can pose special problems: it spreads quickly along fence lines, ditches, and roadsides, and even something as every day as moving equipment or machinery can make the problem worse (as seeds attach to surfaces easier). If you find yourself trying to control DSV, you might want to keep reading to learn more about this plant and what you can do about it…

There are two scientific names for DSV. The most common is Vincetoxicum rossicum, a.k.a. Cynanchum rossicum. This is because there has previously been much difficulty in identifying its correct genus. After recent scientific analysis of the chemical and molecular structures of the plant, scientists have determined that DSV definitively belongs to the genus Vincetoxicum.

The family that Vincetoxicum belongs to is Apocynaceae. Apocynaceae is a family of flowering plants that includes, vines, shrubs, stem succulents, herbs, and trees. These together are commonly known as the dogbane family. The name derives from the fact that parts of these plants were used to poison dogs.

Where did dog strangling vine come from?

The original members of the Apocynaceae family are native to the American tropics or subtropics, Africa, Europe, Australia, and Asia. DSV itself is native to Eastern Europe, or to be more specific, south-western Russia and eastern Ukraine. Within its home range, DSV populations are sporadic, although it is now invading other countries, notably Norway.

Dog strangling vine made its way to North America with the European settlers when they traveled to their new homes approximately 120 years ago. Its first appearance in Canada was in the province of Ontario. Whether it was accidental or horticultural introduction is uncertain, but settlers quickly introduced DSV to other regions. Ontario’s first recorded dog strangling vine specimen is believed to have been collected in Toronto in 1899.

Where can dog strangling vine be found?

Dog strangling vine flourishes in calcareous, or limestone-based, soils. DSV exists in a broad range of habitats, including Great Lakes coasts, stream banks, deciduous forests, bluffs, old fields, alvars, tallgrass prairies, plantations, and shrub thickets. Although the vine suffers reduced reproductive potential and lessened vigor in forests, it penetrates and invades closed-canopy forests. From this point, it has the ability to dominate groundcover especially in areas where there are gaps in the forest canopy.

As of today, DSV is becoming a big problem on both sides of the border. On the Canadian side, it can be found throughout Ontario, portions of Quebec, and is slowly making its way through New Brunswick and Nova Scotia. In the United States, confirmed ‘invasions’ exist in many states, including Colorado, Minnesota, Michigan, Illinois, Pennsylvania, New York, Connecticut, Massachusetts, and New Hampshire.

What else is impacted by the DSV invasion?

Invasive species also affect entire habitats. For example, the globally rare alvars of Ontario are extremely vulnerable to DSV invasions. Many open alvar habitats have been overrun by the vine, which displaces wildlife and native plant species. Since it thrives in open areas, the key is to spot an infestation early and take steps to eradicate it.

Pale Swallowwort is the more common name for dog strangling vine in the United States, but both look the same. DSV has a rootstock that can grow to a height of more than two meters. In forested areas, it is common to see them grow up to eight feet as they wind and climb up the trunks of trees. The stems often have fine hairs and they keep winding around each other, forming thick ropes.  Here are some other identifying factors:

The leaves are oval to oblong and they are opposite each other on the stems. They are smooth to the touch and vary in color from deep green to medium-light green. Leaves that are very dark green often have a shiny luster to them. The size of the leaves is anywhere between 2 to 3 inches in width and 3 to 5 inches in length. They are pointed at the tip and rounded at the base. Nearest to the base of the plant is where the smaller and rounded leaves are found. Mid-plant sees leaves that are the biggest, and they taper off to narrower and smaller as you near the top.

During the months of July and August, long and slender fruit pods begin to form. They are similar in appearance to string beans. Two of the pods generally form at the axil of each leaf. These pods are roughly 0.2 inches wide and 1.5 to 3 inches long. Inside the pods is a milky sap. As the pods grow, they change color from green to brown. Once the pods split open, the seeds are released in much the same way as other members of the milkweed family. The coma (feather-like hair tufts) is what the seeds of the DSV attach themselves to.

In June and July, dog strangling vine begins to flower. The flower clusters are in groups of between 5 and 20 and they are quite attractive. Each flower contains 5 petals and the colors can range from pink to a deep reddish-brown.

Why is it called dog strangling vine?

No one knows exactly why it is called dog strangling vine, but there are a couple of different explanations for the name. There has never actually been a report of a dog being strangled by the vine, but all bets are off when it comes to small trees and plants. Vincetoxicum is from two Latin words, Vinco and toxicum. They mean “to subdue or overcome with poison”. The second explanation is that Vincetoxicum is an ancient word that means “rope-like poison.” The other common scientific name for DSV, Cynanchum, comes from two Greek words, kyon, meaning dog, and ancho, meaning to strangle.

How does DSV grow?

Starting in early spring, DSV begins its growth by growing upright. Once unable to support its own weight, it then turns into a vine. From this point, it slithers along the ground, twining and twisting itself around virtually anything in its way. Eventually it will become completely entangled in whatever it is climbing. Because there is such a hardy and well-established root system, DSV is extremely difficult to control.

DSV is absolutely not edible. Browsing animals like deer and moose will even avoid eating it. If you find yourself lost in the woods, and you are looking for something to eat, there are likely many other plants native to your particular area that are safe for human consumption. You can find a list of these plants on your state’s environment or natural resources websites. Whatever you do, don’t eat DSV!

Despite not being edible, DSV is not poisonous to humans. You can touch it without any ill effects unless you are allergic to other species in the same family. It can however be poisonous to livestock if they ingest the roots or leaves.

How to control dog strangling vine

How to get rid of dog strangling vine naturally

There are some ways that you can get rid of Dog Strangling Vine naturally, i.e. without the use of harsh chemicals. Follow the steps below if you prefer natural methods for weed control:

What else you can do…

It is often said that it takes a village to win the battle against an invasive species. There are several ways besides using chemicals that you can use to help get rid of DSV and stop the invasion.

Tips for at home

As always, natural is preferred! But with particularly bad invasions, there may be a need for some chemical ways to get your infestation under control, especially if it is doing a lot of damage to nearby ecosystems. There are three main herbicides that are used in the destruction of DSV and each has its own specific purpose.

Roundup, a common brand in weed control, has been shown to be effective at killing DSV. Canada has been using it as part of their vine eradication plan since the spring of 2000. However, it needs to be applied directly to the plant. This can be done two ways. Either it can be target sprayed, or it can be wiped onto each plant. It may also need to be reapplied several times per season. Additionally, for colonies of the vine that are large and aggressive, several years of treatment may be needed to ensure complete eradication.

Any tips to share in controlling the dreaded DSV invasion?

Working a homestead is hard work at the best of times. But when you have dog strangling vine on your property, you have a real problem that needs to be dealt with right away. Putting it off for even a few days could significantly impact your garden harvest, simply because the vine grows so unbelievably fast. What was a small shoot a few inches from your tomato plants on Monday could be tangled around your plants by the weekend. Yes, it truly does grow with that much speed! It is quite amazing and scary to see the destruction that dog strangling vine can cause in a short span of time if left unchecked. If you are not sure if you have the vine or not, a call to your local plant authority will help you with identification and the best course of action.